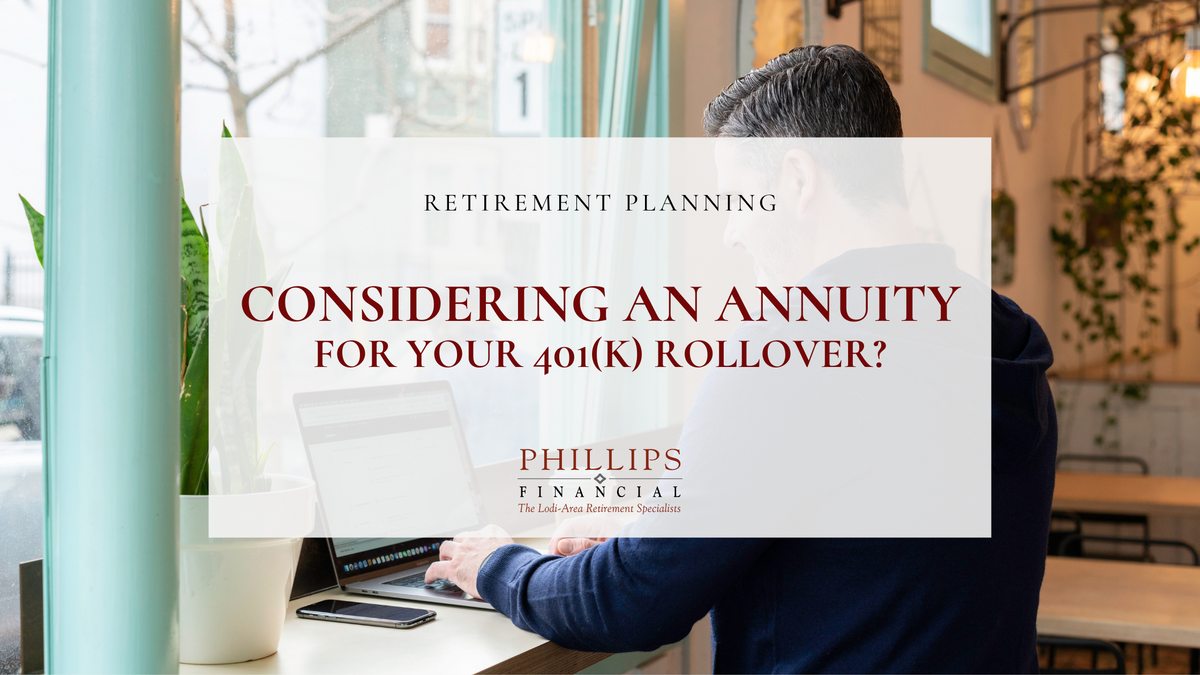 Considering an Annuity for Your 401(k) Rollover?

With companies downsizing to stay in business and corporate takeovers occurring almost every other day, the only thing certain in anyone’s career these days is change.

Take Chris Brown, age 48, for example. After 15 years as a shop-floor supervisor at a large manufacturing company, Chris was unexpectedly laid off. In addition to the initial shock of losing his job, Chris had to make some very important retirement planning decisions.

Chris’s 401(k) plan assets had built up steadily over the years to a tidy $89,367. This was his retirement money, and he meant to keep it that way. Chris could leave his money in the current plan, if permitted or cash out the account value. However, his immediate concern was:

Chris had a number of other options. For instance, he could transfer the money into a long-term CD (certificate of deposit) at his local bank or into an established mutual fund family. However, one alternative that really caught his attention was to roll over his 401(k) assets into a variable annuity, a tax-sheltered retirement savings vehicle that offers multiple payment choices.

A variable annuity (unlike a fixed annuity, which has a relatively low, but guaranteed, rate of interest) offered investment options that Chris had been familiar with in his earlier 401(k) plan and also retained the advantages of tax deferral that he had enjoyed so far. True, the investments were subject to market fluctuations, and were therefore not guaranteed. But, since his tolerance for risk had borne some excellent results in the past, Chris did want to put his money where the potential reward, especially in the long run, could be much greater.

What also attracted Chris were the annuity’s payout options. He could choose retirement income for a specified period, say 20 years; over his entire lifetime; over his and/or his survivor’s lifetime; or from several other available options.

Chris liked the idea of investing his tax-deferred dollars among a variety of funding options that were suitable to his own needs and tolerance for risk. Because he did not intend to touch his money until after retirement (i.e., surely not before age 59½), he hoped to be free and clear of both the IRS penalty and the decreasing surrender charges outlined in the annuity contract.

As you will appreciate, not everybody’s needs and risk tolerance levels are the same. Each individual’s overall goals, objectives, and tolerance for risk should guide his or her investment choices.

Talk to your financial professional to better understand annuities and retirement options.

The opinions voiced in this material are for general information only and are not intended to provide specific advice or recommendations for any individual.

Variable annuities are long-term, tax-deferred investment vehicles designed for retirement purposes and contain both an investment and insurance component. They have fees and charges, including mortality and expense risk charges, administrative fees, and contract fees. They are sold only by prospectus. Guarantees are based on the claims paying ability of the issuer. Withdrawals made prior to age 59 ½ are subject to 10% IRS penalty tax and surrender charges may apply. Gains from tax-deferred investments are taxable as ordinary income upon withdrawal. The investment returns and principal value of the available sub-account portfolios will fluctuate so that the value of an investor’s unit, when redeemed, may be worth more or less than their original value.

This article was prepared by RSW Publishing.